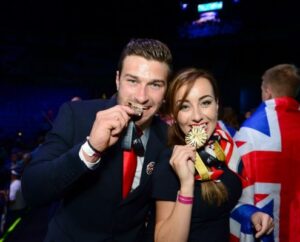 Talented Reaseheath College trained landscape gardener Matt Beesley has proved he is among the world’s best by taking silver at the WorldSkills finals in Sao Paulo, Brazil.

Matt, from Winsford, and fellow team member Jonathan Gill, from Northern Ireland, achieved Britain’s first ever medal in landscape gardening at the global, Olympics style final. The pair had to prove their skills and stamina in hard landscaping, plant knowledge and management by building a garden from scratch in four days under the gaze of 259,000 spectators.

WorldSkills runs the competition bi-annually for students aged 23 and under to showcase the skills and value of young professionals in industries ranging from construction, engineering technology and transportation to IT, communications and social and personal services. The GB team recorded its best ever performance with 33 medals.

Matt, 21, completed his Level 3 Extended Diploma in Horticulture at Reaseheath College in Nantwich in 2012. He now runs his own successful business, Beesley’s Landscapes in Winsford, and employs two apprentices. He first competed in the British selection rounds for WorldSkills while a Reaseheath student and has continued to train intensively as a potential squad member.

The former Hartford High School pupil said: “Winning silver in the world finals has been the best experience of my life. The whole WorldSkills programme has been awesome. I have learned so much and gained such a lot of confidence. I’d particularly like to thank my hard landscape instructor at Reaseheath, Jason Hinks, and my parents for their support.”

Said Jason: “I’m really proud of Matt and how he’s developed as a professional landscaper through WorldSkills. This programme is all about benefiting the students through training and helping them to realise their potential.”