“Before arriving at the Cheshire School of Agriculture as a student in 1948, I had experienced various aspects of farming as a young boy, having been brought up in the heart of the Cheshire countryside.  I spent many school holidays on a cousin’s mixed farm in North Wales, helping with harvesting, potato picking and hand-milking. It was there that I first drove a ‘wartime’ Fordson tractor (on iron wheels*).

“At 18 years of age my first memory of Reaseheath was going there with my father to secure my ‘place’ on the 1948-49 course in General Agriculture.  We travelled from Chester on the Crosville bu 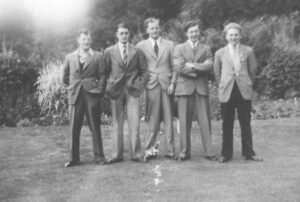 s (local bus company serving Cheshire and North Wales) where we had to alight at Nantwich aqueduct, walk along Welshman’s Lane and on across the Chester Road before finally reaching the entrance of Reaseheath, by the then women’s hostel. As we approached, corn cutting was in progress in the front field and I remember remarking to dad, “Oh look, they have a binder pulled by an orange pre-war standard Fordson” – I felt at home immediately!

I started as a student in 1948, accompanied by approximately 30 other male students (including one or two on poultry or horticulture courses) and around 15 female students.

“I recall a herd of large white breeding sows, which farrowed outdoors and a large number of store pigs. In those days pigs were fed on whey from the cheesemaking and swill collected daily from local hospitals etc…This had to, by law be boiled before use. The milking herd at Hall Farm consisted of 60 Pedigree Ayrshires housed in two shippons, milked into bucket units. Accompanying them were four work horses carrying out many duties in conjunction with the two tractors on site, a 1938 orange standard Fordson and a red Massey Harris 101 Rowcrop, which probably arrived from the USA on lease-lend during the Second World War. During my second year as a student (1949) a Ferguson T20, known as the ‘the grey fergie’ appeared, complete with much of the Ferguson toolbar equipment.

“Most of my lecturers took place in the buildings around the quadrangle, which had originally been a stable yard.

“On the social side of things, we weren’t allowed to leave the premises on weekdays and there was a 10pm curfew on a Saturday night. That being said, there were plenty of social events at Reaseheath, quizzes, table tennis and of course the dances. Students organised weekly dances in the grand Reaseheath Hall, where music streamed from a from a wind-up gramophone, playing ‘78s’.

“We all had the occasional excursion by coach (e.g. Boots Experimental farms at Nottingham, plant breeding stations, creameries of famous pedigree herds and the like).

“After my student days, I stayed at Reaseheath for two more years working with the pedigree Ayrshire herd as assistant herdsman and demonstrator, before joining the Ministry of Agriculture as a land drainage and farm water supplies officer.

“It also was during my time as a Reaseheath student that met my wife, Maureen, who worked for the Ministry of Agriculture, Fisheries and Food at Berkley Towers, Crewe. We during a joint trip to Trentham Gardens in 1948. We have been married for 65 years, so that was an added ‘bonus’ of becoming a Cheshire School of Agriculture student.

“Since my time as student Reaseheath has grown beyond recognition, which is fantastic to see. I’m proud to have been a part of its history and will treasure my memories of traditional farming in the 1940s.”